From Musician to Physicist: The Journey of Baptiste Royer 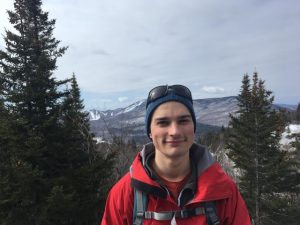 As a double bassist with a deep appreciation for music,­Baptiste began his studies at the Conservatoire de musique de Montréal, obtaining a master’s equivalence. He eventually decided to abandon the world of music to make his way into the realm of science. Wanting to face new challenges, he hesitated a long time between mathematics and physics. The Sherbrooke-born musician decided to set his sights on physics since he wanted to apply mathematics to more tangible projects.

Determined to pursue a higher education, he completed an accelerated passage from master’s to PhD. For more than four years now, he has been working on various projects in the field of circuit quantum electrodynamics under the supervision of Alexandre Blais, a mentor who guided him in his quest to become a researcher.

His main research interest is centred on the study of circuit quantum optics and the use of microwave photons to propose new experiments. One of these experiments deals with single photon detectors, indispensable tools for quantum optic experiments: “The realization of a single photon detector for microwave light remains a considerable challenge even today, in part because of the low energy of microwaves. Such a detector would unlock a wide range of applications, from quantum computing to the detection of dark matter.”

The paper published in PRLproposes a method that could measure single microwave photons with great efficiency. This method overcomes the difficulties related to the measurement of single photons by combining concepts from atomic physics with notions of measurements of superconducting circuits. Currently, a team from the University of California, Berkeley, is working on the development of this detector.

“What’s interesting about circuit quantum electrodynamics is that paper and computer modelling works really well. In theory, if we have an idea that remains within the standard constraints, we know that if it works on the computer, there are good chances that it will also work in the experiment. Going from there, we can start thinking about interesting possibilities. How can we design new circuits to make discoveries? To a certain extent, this is how the project to create a photon detector was born. We figured out how to do it and brought it to the team at the University of California, Berkeley.”

Baptiste likes to ride the wave, explore new ideas, and make discoveries. He’s open to accepting new opportunities presented to him, including his collaboration with ETH Zurich that was proposed to him by Alexandre Blais. This collaboration enabled him to present a promising approach for the construction of a quantum computer. The approach in question is modular architecture, where several independent nodes communicate through “quantum channels.” The superconducting circuits form a promising approach to create compute nodes.Even today, experiments that present several samples of connected superconducting circuits are quite limited.

The paper published in Nature, in collaboration with ETH Zurich, demonstrates a quantum state transfer between two superconducting qubits located on two different samples and separated by a metre of cable. With this device, it’s possible to use microwave photons to make the transfer of an arbitrary quantum state. This experiment is therefore an important step toward the realization of a modular quantum computer. “Thanks to this same protocol, we have generated an entanglement between these two qubits, proving beyond any doubt the quantum characteristics of this transmission channel.”

“Baptiste’s theoretical work has enabled a very precise modelling of the experiment, which has led to a very solid interpretation of experimental results. This is an aspect that was raised by the members of Naturein their report,” adds Professor Blais.

While he still has approximately one year left in his PhD, Baptiste is already thinking of the future and wishes to pursue postdoctoral studies. He’s unsure where his journey will take him, but there’s one thing he knows for sure: his ultimate goal is to be a teacher. A year before the end of his PhD, he confirmed that just like music, physics have become a true passion.